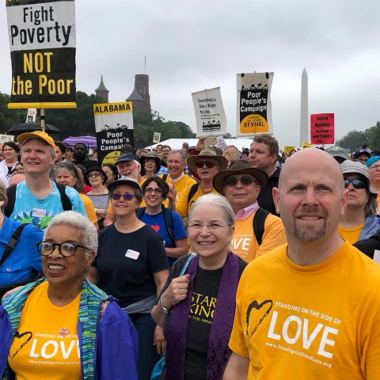 After the initial recommendation of our CVUU Board of Directors and our Social Justice Committee,  and a subsequent and nearly unanimous vote of our CVUU members at our Mid-Winter Meeting, Feb. 23rd, the Poor People’s Campaign is now an Affiliate Member of our congregation.

The CVUU Bylaws (via an adopted policy in our Policy and Procedures Manual) provide for the granting of affiliated group status to outside organizations as long as those organizations agree with the Seven Principles of Unitarian Universalism as outlined by the UUA, have a governing body with officers, and have at least one member of CVUU on the governing body. The Poor People’s Campaign met all these requirements. CVUU member Steve Hansen is now our CVUU Affiliate Liaison. The Unitarian Universalist Association  is an official endorser and faith partner of the Campaign.

The Poor People’s Campaign is uniting tens of thousands of people across the country to challenge the evils of systemic racism, poverty, the war economy, ecological devastation and the nation’s distorted morality.

Rally buses from multiple Hampton Roads locations will transport attendees to the U.S. Capitol to demonstrate the collective power of poor and low-wealth people. Attendees will march with thousands others from across the nation to demand that both major political parties address the interlocking injustices of systemic racism, poverty, ecological devastation, militarism and the distorted moral narrative of religious nationalism by implementing a Moral Agenda.

You too can get on a June 20 bus leaving the CVUU parking lot to join other UUs supporting the Campaign. Visit https://rally.co/poor-peoples-assembly to reserve a seat soon before prices rise later this month.

One Response to “Welcome to our new affiliate!”