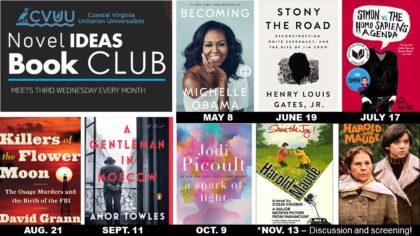 Join us for discussion and fellowship!

The Novel Ideas is a new, UU-style, open-to-all gathering & discussion group of bibliophiles who appreciate a wide genre of reads, from history to true crime. We will meet at 6 p.m. the third Wednesday of each month (except for May!) on the 3rd floor. The meetings will be BYOB—Bring Your Own Book, Bring Your Own Bottle (Adult refreshment or soft drinks) & Bring Your Own Bowl (of dips, chips or sweets!).

MAY 8TH— “Becoming” by Michelle Obama:

This is the auto-biography of Michelle Robinson Obama  – First Lady of the United States from 2009 to 2017. Becoming is an insightful, honest memoir, filled with frank recollections of growing up in a working class household in Chicago, to leaving the White House residence.  The former First Lady speaks about finding her voice, her career path, her public health campaign and her role as a wife and mother.

This long-overdue history book recounts the struggle by African-Americans for equality after the Civil War and the violent counter-revolution that resubjugated them, as seen through the prism of the war of images and ideas that have left an enduring racist stain on the American mind.

JULY 17TH— “Simon Vs. The Homosapiens Agenda” by Becky Allbertalli:

This young-adult fiction tells the tale of 16-year-old Simon who is keeping a secret from his family and best friends: he is gay. When a fellow student anonymously posts on tumblr that he is gay, Simon – also anonymously – tells him his secret. They strike up a companionship through email and then Simon’s emails get into the wrong hands.

AUGUST 21— “Killers of the Flower Moon—The Osage Murders and the Birth of the FBI” by David Grann:

This is a twisting, haunting true-life murder mystery about one of the most monstrous crimes in American history, the series of killings of members of the Osage Indian nation in Oklahoma.  It also illustrates the birth of the FBI, who took up the case. It was one of the organization’s first major homicide investigations.  The book is a  a searing indictment of the callousness and prejudice toward American Indians that allowed the murderers to operate with impunity for so long.

SEPTEMBER 11— “A Gentleman in Moscow” by Amor Towles:

This is a transporting novel about a man who is ordered to spend the rest of his life inside a luxury hotel. In 1922, Count Alexander Rostov is deemed an unrepentant aristocrat by a Bolshevik tribunal, and is sentenced to house arrest in the Metropol, a grand hotel across the street from the Kremlin. Rostov as never worked a day in his life, and must now live in an attic room while some of the most tumultuous decades in Russian history are unfolding outside the hotel’s doors. Towles paints a vibrant picture of Soviet history from 1922 through 1954.

OCTOBER 9— “A Spark of Light” by Jodi Picoult:

Reviewers have called is a gripping fiction, told backward, hour by hour, of  a shooting in an abortion clinic. Picoult humanizes the hot-button issue of abortion with this tale, which is sure to spark conversation for the reader. How do we balance the rights of pregnant women with the rights of the unborn they carry? What does it mean to be a good parent?

The zany, humorous love story, turned screenplay, of two people who find each other at just right moment – each fulfilling a desperate need for the other that allows them to move forward on life’s journey. Young Harold has nothing to do in his life but go to funerals and fake his suicides. When he meets 79-year-old Maude, his life changes completely. Discussion will be followed  by a screening of the 1971 film.