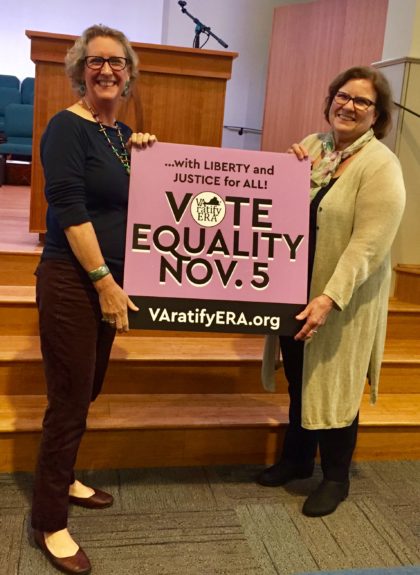 In keeping with our belief in the right of conscience and the use of the democratic process within our congregations and in society at large, we held a Special Congregational Meeting of the Coastal Virginia Unitarian Universalists on Oct. 27th and adopted two resolutions supporting gun control and equal rights. The following press release was sent to local media, our fellow UU congregations in our southern region and many others:

The mass shooting at the Virginia Beach Municipal Center in May and a failed effort to pass the Equal Rights Amendment in Virginia in February prompted a Special Congregational Meeting of the Coastal Virginia Unitarian Universalists (CVUU) Sunday, where members adopted two resolutions, taking a public stand on gun violence and equal rights.

In keeping with the church’s rich history of heralding social justice issues, these two resolutions mark the 4th and 5th adopted by CVUU in the last decade. The core of the congregation’s mission is to widen the circle of compassion and inclusiveness.

During the 1950s and 1960s the congregation was actively involved in the civil rights struggle and the campaign to overturn Jim Crow laws. In 1967 church members were instrumental in forming the local chapter of the American Civil Liberties Union, and for 10 years the church hosted ACLU meetings. The church then became a center for opposition to the War in Vietnam and provided draft and military counseling. The church was the first in the nation to sponsor a federally funded VISTA project in the late 1960s and early 1970s, concentrating on the problems of the inner city and staffed with the participation of black street leaders.

Since then, the congregation has worked to secure LGBT rights and raise HIV awareness. Most recently, CVUU congregants have worked for marriage equality, redistricting reform, and environmental and climate issues surrounding the Chesapeake Bay.

We, the members of Coastal Virginia Unitarian Universalists, believe that gun violence is a serious problem in our community and our country, and that our elected representatives must take stronger actions to prevent future acts of gun violence. In particular, we support measures to ban military style weapons, high-capacity magazines, bump stocks, and silencers, to limit frequent handgun purchases, to require thorough background checks for all gun purchases, and to remove guns from the hands of people identified as a risk to self or others and/or those who have demonstrated domestic violence or the threat thereof.

Only by enacting reasonable and sane laws that limit gun access and use can we protect ourselves from the increasing threat of gun violence.

CVUU president Anne Odell said congregants stand united behind the resolution. “Too many churches, schools, and workplaces have suffered the terror of gun violence because of the excessive latitude that we have allowed the gun industry in this country. We can enact reasonable and popular safeguards to reduce the risk of gun violence, and still protect the legitimate rights of individuals to own guns.”

The newly adopted resolution on the Equal Rights Amendment reads:

Therefore, be it resolved that we, the members of Coastal Virginia Unitarian Universalists, affirm that sex discrimination is a persistent social injustice afflicting our community and our country, and that the Equal Rights Amendment is an appropriate remedy for this problem. We call on the Virginia General Assembly to ratify the ERA to the U.S. Constitution during the 2020 legislative session.

Odell said CVUU congregants are hopeful the ERA will be ratified next year, since it only failed by a single vote in February when the House of Delegates deadlocked 50-50 on a bid to force a full floor vote.  “We believe ratification of the Equal Rights Amendment would provide a clear federal judicial standard for deciding cases of sex discrimination and a strong legal defense against the rollback of women’s rights.”

If passed, Virginia will make history as the 38th U.S. state (and final one needed) to ratify the Equal Rights Amendment, some 48 years after it was passed by both chambers of the U.S. Congress and signed by President Nixon. Odell said CVUU members would like to see our Commonwealth claim the historical honor of adding the ERA as the 28th Amendment to the U.S. Constitution. For an Amendment to be added to the Constitution, at least 2/3 of states (or a minimum of 38) must pass it. In May 2018, Illinois became the 37th and most recent state to ratify the ERA.